In the ad, Kinsey declares herself an “Alley Cat Ally,” and a supporter of Alley Cat Allies’ major campaign to raise awareness about the millions of Americans who care for stray and feral cats in their communities.

“We are delighted to have Angela Kinsey on board to represent the individuals from all walks of life who share compassion for these cats,” said Becky Robinson, president of Alley Cat Allies, the recognized authority on feral cats and Trap-Neuter-Return.

“Kinsey’s character on The Office, Angela, exemplifies a stereotype sometimes associated with cat lovers,” said Robinson. “But the truth is millions of Americans have opened their hearts and wallets to stray and feral cats.”

A national survey by the respected research organization Harris Interactive found that over 40 percent of Americans have fed a stray cat in their lives, and one out of five has done so in the past year.

Feral cats are the same species as domestic cats, but they are not socialized to people and prefer to live in family groups called colonies. Because they are not adoptable, they are almost always killed in animal shelters.

Robinson noted that many progressive communities across the country have adopted a lifesaving program called Trap-Neuter-Return, in which feral cats are humanely trapped, brought to a veterinarian to be neutered and vaccinated and returned to their outdoor home. Trap-Neuter-Return is the best course of action for feral cats because it ends the breeding cycle, stabilizes populations and improves the cats’ health, Robinson said.

As mentioned in Angela’s latest iVillage blog, she teamed up with Tiny Prints and designed a card for them. All the proceeds will go to KaBOOM, a charity that helps neighborhoods get funding for playgrounds in local parks.

You can buy Angela’s designs below. They’re really cute! 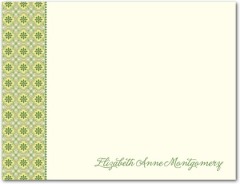 TotalBeauty.com posted an interview with Angela. She shares a few of her favorite beauty tricks! 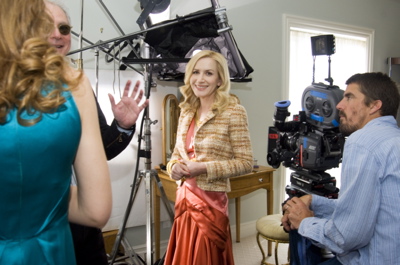 “A while back, I got to sit in on a commercial shoot for Clairol Nice ‘n Easy starring Angela Kinsey (she plays Angela on “The Office,” my fave show, btw). If you haven’t seen the ads, Angela plays Gigi, a guardian girlfriend that helps women improve their looks…I managed to snag Angela for a few minutes between takes, and while she wouldn’t spill what happens next season on “The Office,” she did share some beauty tips and her favorite products.”

Steal Beauty Tricks from Angela from ‘The Office.’

I was at OfficeTally a few minutes ago and saw that Angela will be on the Roe Conn show WLS-AM 890 today between 2-7pm Central time.

You can listen live here:

Angela did a 45-minute chat today on OfficeTally.com! As soon as the transcript is up, I will post a link to it.

UPDATE You can now read the full transcript here.

In Jenna Fischer’s latest blog, she gives an update on how Angela and baby are doing:

“Angela is an amazing mother. I’m beyond impressed. She has the calm of someone who’s been through it before. The sleep deprivation makes her funny to talk to. I was visiting her one day and she fell asleep in the middle of a conversation. Then, she woke up and kept talking as if nothing had happened! It was hilarious.”

John Webster from Scranton’s Rock107 reports on an update he received from Angela and her baby.

You can read his story here: It’s a Girl

Weighing 6 lbs., 14 oz., Isabel Ruby Lieberstein was born at 12:50 p.m. Saturday. Among those at the hospital were Kinsey’s mother, Bertie Kinsey, and the actress’s friend and castmate Jenna Fischer, according to Kinsey’s rep, Tess Finkle.

→ Read more: The Office’s Angela Kinsey Has a Baby Girl

Congratulations to Angela and her husband Warren, who have just announced they are expecting their first child!

“Time to throw a baby shower at The Office: Angela Kinsey is expecting!

“She and her husband are very excited,” the 36-year-old’s rep confirms to Usmagazine.com.

The actress is due in May.”

I’m so happy for them!