You’ll think you’ve departed Chicago and arrived in Scranton, Pennsylvania, when you walk into Replay Lincoln Park’s new The Office pop-up bar, which officially opened its doors over the weekend. A section of the arcade bar received a 9-to-5 makeover, recreating desks belonging to Jim Halpert and Dwight Schrute, complete with desktop computers, Post-It notes and Froggy 101 bumper stickers (we didn’t check to see if there’s a stapler submerged in Jell-O in Dwight’s drawer).

Throughout the pop-up, you’ll find cardboard cut-outs of your favorite characters and walls peppered with references to specific episodes from the long-running series, including Michael Scott’s $340 check to science, an “It is your birthday” banner and Pam’s painting of the Dunder Mifflin office park. At the bar, you can order drinks inspired by the series, such as the One of Everything, featuring equal parts Scotch, absinthe, rum, gin, vermouth, triple sec and two packs of Splenda.

Replay’s The Office pop-up will be open for business through August 20, so stop by and put all of those Michael Scott quotes you’ve memorized to good use.

Click here to find out more about ‘The Office’ Chicago pop-up bar!

Angela and her husband, Josh, sat down to chat with Roselyn Sanchez about “Blacked Out,” a short film written by Angela and directed by Andrés Anglade. The short film will be showing at Puerto Rico’s Rincón International Film Festival on Sunday, April 2.

A she said/he said recounting of a city-wide blackout in Los Angeles. For her it was a romantic night that brought people together. For him the night had danger at every turn.

Click here to find out more about the Rincón International Film Festival and to purchase tickets for “Blacked Out.”

The event recognized the multi-talented Seth MacFarlane for his longtime support of Oceana and work as an advocate for the oceans. The sold-out evening was held at a private coastal villa in Laguna Beach. Over 400 guests attended the event, raising more than $1.3 million to protect the oceans. – Source

Turtles help fortify coastal economies and have helped keep the ocean healthy for millions of years. TOMS is excited to partner with Oceana to thank our mighty sea friends for their ecological importance and support Oceana’s work to protect them. 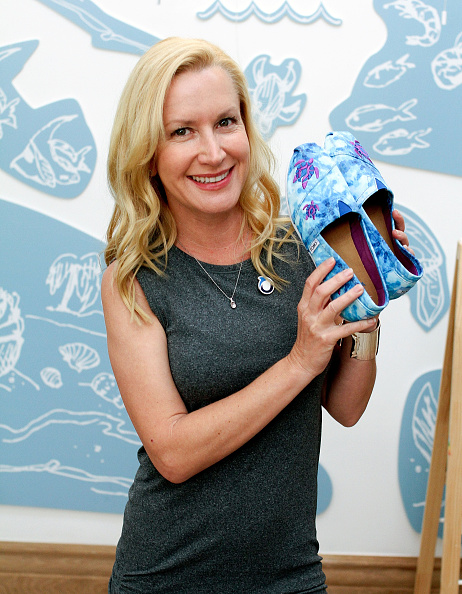 To learn more about the partnership or to get your hands on these adorable shoes, click here!

ICYMI, there was a mini ‘Office’ reunion on Wednesday night when Angela attended the opening night of ‘Thom Pain‘, a new play featuring Rainn Wilson playing at the Geffen Playhouse.

I can’t help but smile whenever anyone from the cast reunites!

A few photos of Angela arriving at HBO’s Emmy After Party last night. 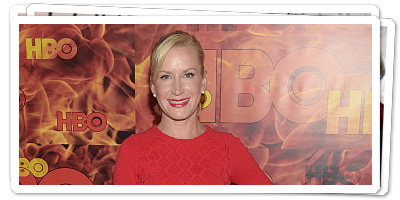 This weekend, Angela will attend the Big Slick Celebrity Poker Tournament in Kansas City. The tournament will benefit Children’s Mercy Hospital Cancer Center whose mission is to help improve the physical and emotional well being of children with cancer and their families.

Funny guys Rob Riggle, Paul Rudd and Jason Sudeikis, who grew up blocks from each other in Johnson County, return home this weekend for a fourth year as hosts of Big Slick. The fundraiser includes an all-day poker tournament Saturday at Harrah’s North Kansas City casino and a party and auction that night at the Midland theater.

There will also be an online auction:

The online auction starts Tuesday at bigslickkc.org. Items include an autographed Jon Stewart photo; the board game “Clue: ‘The Office’ Edition” signed by the sitcom’s cast; a jersey signed by former NFL player Michael Strahan (“Live With Kelly and Michael”); and a Sporting KC jersey signed by players, along with two game tickets. – Source

Angela and fellow ‘Office’ co-stars attended The Hollywood Reporter’s celebration of ‘The Mindy Project’ on August 25.

Alliance for Women in Media Foundation (AWMF) is pleased to announce Angela Kinsey, of the Emmy® Award‐winning show The Office, will serve as Host of the 37th Annual Gracie Awards Gala on May 22, 2012 at the Beverly Hilton Hotel. The Gracie Awards (also known as “the Gracies”) recognize exemplary programming created for women, by women, and about women in all facets of media, including radio, television, cable and digital media. The awards program also encourages the realistic and multifaceted portrayal of women in entertainment, news, features and other programs.

“We are delighted that Angela Kinsey will be hosting the 2012 Gracies,” said AWMF Chair Valerie K. Blackburn. “As we see each week on The Office, Angela is a very talented and funny actress. With Angela as the host, this year’s Gracies promises to be an exciting and dynamic event.”

“I’m very excited and honored to be part of the 2012 Gracie Awards and look forward to celebrating women in our industry,” said Kinsey.

Angela Kinsey portrays the feisty, tightly‐wound head of accounting “Angela Martin” at Dunder Mifflin on NBC’s Emmy winning show The Office. As a struggling actress, Kinsey worked as an operator for 1‐800‐Dentist, and often draws upon her days in corporate America for her scenes in The Office. Along with her many television and film credits, Angela can be seen in the upcoming film “Struck By Lightning” opposite Chris Colfer and is currently shooting “Hot Bot” with the Polish Brothers in Utah.

“The Alliance for Women in Media Foundation is thrilled to welcome Angela as the host of the Gracies,” said AWMF President Erin M. Fuller, CAE. “With her success in television and film, as well as her use of digital media to engage her audience, Angela is an inspiring role model for all women in media.”

The Gracies are presented by the Alliance for Women in Media Foundation, the philanthropic arm of the Alliance for Women in Media that supports educational programs, charitable activities, public service campaigns and scholarships to benefit the public, the electronic media and allied fields. The Gracie Awards, established in 1975, honors programming and individuals of the highest caliber in all facets of radio, television, cable and digital media, including news, drama, comedy, commercials, public service, documentary and sports. – Source

You can read more about the Gracies and get information on the gala and luncheon here.

On May 17, 2011, the U.S. Fund for UNICEF will give celebrity supporters a reason to sing their hearts out with the first-ever Playlist with the A-List celebrity karaoke benefit event.

The event will take place at the El Rey Theatre at 8pm. 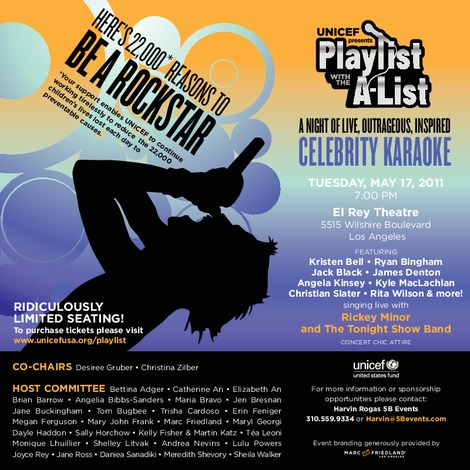 UNICEF has saved more children’s lives than any other humanitarian organization in the world. Working in more than 150 countries, UNICEF provides children with health care, clean water, nutrition, education, emergency relief, and more. The U.S. Fund for UNICEF supports UNICEF’s work through fundraising, advocacy, and education in the United States.

Inside the Edge posted a video from tonight’s La Femme Festival:

END_OF_DOCUMENT_TOKEN_TO_BE_REPLACED

Last night I attended Kitten Rescue‘s 3rd Annual Fur Ball at the Skirball Cultural Center and had a chance to see Angela. She along with others from ‘The Office’ cast, including Jenna Fischer who was the host, were there to help fundraise for Kitten Rescue’s programs and the Kitten Rescue Sanctuary.

The Fur Ball, which started with cocktails and Hors D’Oevres and continued with an amazing dinner, turned out to be a great event. Kitten Rescue raised a lot of money through silent and live auctions, including a set visit to ‘The Office’ that went for $5,000 and a chance to get a personalized voicemail message from Jenna as Pam Beesly for $700!

I had a fun time and it was great to meet not just cat lovers but so many animal lovers!

To learn more about Kitten Rescue and their different programs, visit KittenRescue.org. 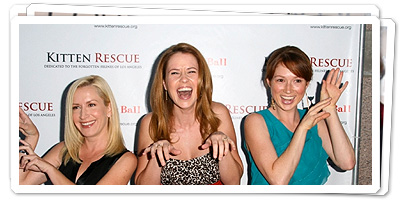 REMINDER Kitten Rescue confirmed that Angela will attend the 3rd Annual Fur Ball at the Skirball.

“Please join Kitten Rescue in celebrating 13 successful years of animal rescue in Los Angeles. The Fur Ball at the Skirball will feature celebrity guests, cocktails and Hors D’Oevres, dinner, live entertainment, a silent auction, raffle and much more! All proceeds of the fundraiser will benefit Kitten Rescue’s programs and the Kitten Rescue Sanctuary.”

“Tickets are $125. You may also purchase an Angel Table for $1250, with seating for 10 and a promotional sign on the table. Angel Table purchasers will also receive a special mention in our Event Program.”

If you can’t attend but would like to help, you can donate to Kitten Rescue’s programs and the Kitten Rescue Sanctuary here.

AKFans reader Kevin sent in these pictures from last night’s event. Thanks, Kevin!