Angela was featured in The Eleusis, the official publication of Chi Omega Fraternity!

The award-winning actor-comedian dishes on her Chi Omega experiences and how they helped prepare her for her role in The Office. 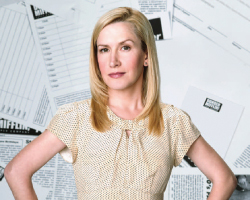 It’s been one of those days when Angela Kinsey could have used an extra pair of hands and another head to balance all the balls she was juggling on her day off. Angela, who plays Angela Martin on NBC’s hit sitcom The Office, was at home and in the midst of a chaotic afternoon in sunny Southern California when her cell phone and her doorbell went off simultaneously while the FedEx guy and the contractor she had hired to put up a fence needed her signature.

“I’m sorry,” Angela said when she was interrupted during our interview. “It’s funny. You just asked me how I balance it all and my friend just passed me a note saying that I hadn’t bought enough cookie mix. Suddenly there’s a lot of traffic in my house!”

A scene such as this one might have left a lesser woman totally frazzled but Angela, who was born in Lafayette, Louisiana and grew up in Jakarta, Indonesia comes from good, strong stock. She’s a Chi Omega from Baylor University and as such is very adept when it comes to multi-tasking. She credits her sorority experience for helping her keep a handle on things.

“I think any service organization or service network of any kind teaches you how to deal with people,” Angela said. “Chi Omega helped me learn how to manage, how to manage being in a group, how to delegate, give instructions, and take instructions.”

Angela, who now lives in Los Angeles with her 2-year-old daughter, Isabel, has fond memories of her days as a sorority girl at Baylor. Having grown up overseas the whole Greek system was rather foreign to her—especially since no one in her family had ever pledged. She opted not to pledge her freshman year but after seeing all the fun her girlfriends had being a part of something, she knew she wanted to wear the cardinal and straw, too.

“There were mixers and dances and softball games and all kinds of different things,” Angela said. “I just wanted to be a part of that. And especially if you move out of the dorms (there were no sorority houses at Baylor), it was a way to stay connected to the school.”