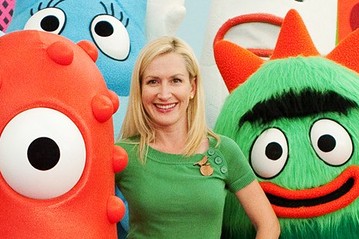 “Angela Kinsey is best known to TV viewers as straight-laced Angela Martin on “The Office,” but for her 2-year-old daughter Isabel, her newest role might make more of an impression. The 39-year-old actress will be guest-starring today on the Nick Jr. children’s series “Yo Gabba Gabba!” as a teacher who helps kids feel more comfortable with their first day of school.

Kinsey’s own formative years had healthy share of drama, transition and adjustment–when she was a child, the Lafayette, La.-native moved to Jakarta, Indonesia and later relocated to Texas.

“Yo Gabba Gabba” airs on Nick Jr. at 5 p.m. ET today. Kinsey talked to Speakeasy about “Yo Gabba Gabba!” singing in public, and what it’s like being the new kid in school in the Lone Star State in the big-haired 1980s.”

Read more: ‘Yo Gabba Gabba’ gets a visitor from ‘The Office’