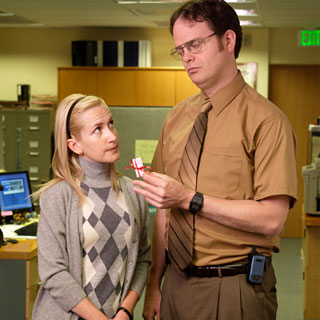 “Pam (Jenna Fischer) and Jim (John Krasinski) got their happy ending on ‘The Office’ (marriage and babies, baby!), so what’s the holdup on some smoochin’ between the beet farmer and his ladylove? We’re still rooting for Dwight (Rainn Wilson) and Angela (Angela Kinsey) to reunite. Will it happen?

So are we ever going to see Dwight and Angela together again? (After all, they were legally married by a German-speaking Mennonite minister in a horse barn.)

“Hello, sister! I wanna know, too!” Angela Kinsey told us at the NBC Golden Globes party. And she’s not the only one. “Rainn [Wilson] came up to me, day one of filming and said, ‘When are we gonna get it on again?’ I said, ‘I dunno, Rainn, but let’s make it happen!’ So Rainn and I really believe that Dwight and Angela are the soul mates.”

Thankfully, Angela also assured us that the lovelorn twosome are totally not a lost cause. “I hear rumblings that they’re gonna find their way back, but it might take a little while,” said Angela. “I’m all along for the ride. I wanna find Dwight, that tall geeky man. I want it. I want it!””